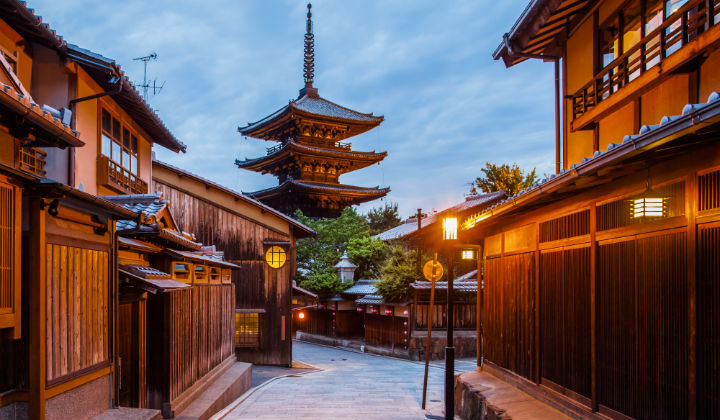 The 2019 Rugby World Cup is underway with the first game taking place in the country’s busy capital, Tokyo last Friday.

For the next six weeks twenty nations will compete for the Webb Ellis Cup with matches taking place in twelve of Japan’s stunning cities including Osaka, Yokohama and Sapporo.

We recently published these seven things you must do when visiting Japan, and below we explore the twelve cities hosting matches in the fastest growing destination in the world.

The second largest city in Japan with a population of over three million, Yokohama is just 30 mins by train from central Tokyo. You’ll find Japan’s largest China Town in Yokohama with a vast selection of restaurants and shops and don’t miss the Sankeien Garden in the south of the city – the tranquil Japanese garden exhibits a number of historic buildings, a pond, small rivers, flowers and an impressive temple.

Japan’s capital city has it all, from impressive palaces to karaoke bars and even cat cafes.

It is home to the tallest structure in the country, the Tokyo Skytree, where you can even see Mount Fuji on a clear day.

For high end shopping visit the Ginza district or discover an array of electronics and manga stores at the Akihabara.

One of the most famous and photographed areas of Tokyo is the Shibuya intersection, with 3,000 people crossing at any one time!

Home to England v the USA on 26 September this attractive city is one of Japan’s fashion capitals.

Take a short bus ride to the top of Mount Rokko to capture the mesmerising panoramic view and Japan’s first ever botanical gardens and golf course.

Away from fashion Kobe is a food-lovers paradise too; home to world-famous Kobe beef and a leading producer of Sake.

Often referred to as Japan’s Riviera Shizuoka is located in the south of the country and the perfect base if you want to visit Mount Fiji, the 12,389ft volcano.

In Oita you will find Takasakiyama Natural Zoological Garden where 1,300 wild Japanese Macaque monkeys reside – visit at feeding tome for the best experience. The city is famous throughout Japan for its hot springs and it’s the perfect place to relax but be prepared as nudity is normal here.

Saporro is the capital of the northern island and staged the 1972 Winter Olympics. The city is set to be a big hit for rugby fans as it is known as the birthplace of beer in Japan.

The Sapporo Beer Museum opened in 1987, it’s free to visit but tastings are chargeable.

Did you know that Toyota was originally known as Koromo and changed its name in 1959 to reflect the global status of the car manufacturer?

It is an industrial city with many museums and parks including Kuraigaike Park which contains a number of set piece gardens including an English Garden, a Four Seasons Garden and even a ‘Guest Ranch’ with sheep and horses.

Fukuoka is a key port on the southenrly island and is close to the Asian mainland.

The best known site is Canal City Hakata – a popular entertainment complex with a variety of shopping, dining and entertainment options. It’s very colourful and be sure to catch one of the fountain shows on the waterway.

The castle was torn down after the Meiji Restoration as an unwanted symbol of the feudal past and the castle ruins are located in the middle of the city in Maizuru Park.

Famous for Kumamoto Castle which is one of the largest and most complete in the whole of Japan.

The castle suffered serious damage in the earthquakes of 2016, however it is due to reopen in October 2019 during the Rugby World Cup.

A favourite with foodies the city is known for its good quality fruits, vegetables, beef and seafood.

You’ll find some of the world’s best street food in Osaka – the birthplace of instant noodles.

The spectacle of Osaka Castle is a reminder of the country’s samurai heritage and is complete with moats, greenery and a museum. If you’re looking for nightlife head to Dotonbori where you’ll find dazzling neon-lit area of theatres, restaurants, bars, nightclubs and a weird oblong Ferris wheel on the side of a tower.

The perfect location for history buffs, Kamaishi was key in Japan’s iron and steel production.

Unfortunately the tsunami of 2011 hit the area badly and the rugby stadium was named Kamaishi Recovery Memorial Stadium to emphasise the areas continuing recovery.

Officially the hottest place in Japan with a record temperature of 40.9C recorded in 2007, Kumagaya is is home to the Menuma Shodenzan Kangiin Temple which is dedicated to the spirit of Shoden, widely considered to be a Japanese Buddhist derivation of the Hindu god Ganesha, the God of Wisdom.

The real treasure of the temple is the Inner Hall behind the Main Hall where you’ll find a statue of Shoden which is usually hidden from the public.

If you’re heading to **Japan for the 2019 Rugby World Cup **don’t forget your Travel Insurance.

You can compare up to 48 prices online and get cover for your pre-existing medical conditions in minutes.